In 1998 in the ashes of Risky Riot splitting up Mats Brodd (Risky Riot vocalist) and I decided
to start a new band, a bit more kick-ass and punky, more sleaze and less progressive. Burnitude was born, or Burner as the band was called in the beginning, but after receiving legal threats from a lawyer of another band called Burner I came up with the way more original Burnitude - “The eternal burning flame of ambition and love for what we do and our main ingredient in doing it, attitude!”.


We recorded some demos/singles with Jan Viberg on the drums but in 2000 Matte left, he moved out of town, way up north to live another life. I thought that the foundation we had was too good to let go and decided to carry on with it as a three-piece band, handling the vocals myself, which was a first for me. Soon I met and hooked up with, what became my brother from another mother, whom I came to share many bands, projects and the stage with for so many years to follow. A little bit later we were joined by Mats Öström (Moey) who was a perfect fit to handle the bass, perfectly harmonising and balancing up my and Vesa’s virtuous, progressive styles and keep it all down to earth. I wrote loads and loads of Burnitude songs, giving more room for two of my greatest influences, Shotgun Messiah and The Hellacopters, that hadn’t quite got though in my music that much earlier, and we released a handfull of underground releases and did countless of gigs through the following six, seven years or so. 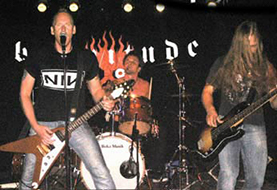 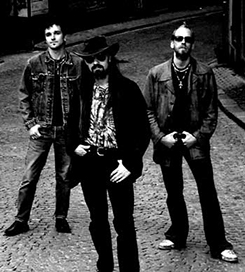 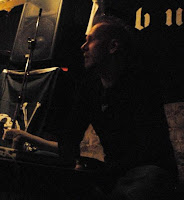 Around the same time, around 1998, I was thinking about maybe start writing in Swedish and wrote a couple of songs with lyrics in Swedish and then I accidentally discovered what came to be one of my greatest influences, Joakim Thåström, and got really, really hooked. I’ve never really listened to music in Swedish before - at least not since I was six or seven when I was totally hooked in Björn Skifs in the end of the 70’s. Inspired by Thåström I got deeper into writing lyrics in Swedish and was surprised how great they turned out and how much easier it was for me to write in my native language.

I’ve always written lots of lyrics, I love lyrics. Many might not know it but like in Lizard Eye for instance, I wrote most of the lyrics, I wrote way more lyrics that I wrote riffs in that band. Anyway, I thought I couldn’t really put songs with Swedish lyrics in my current bands and project so I did what I always did, I started a new band/project and named it “Under” (the, pretty cool, Swedish word that is, meaning: marvel, under, during, beneath, below etc). I recorded some songs with, again Jan Viberg on the drums, and me handling the rest, and I went for Maiden style twin guitars. I liked to describe it as a mix between early Iron Maiden and Thåström. Vesa and I also started working on a second release, a full-length concept album actually, but we never had the time or opportunity to finish it. We never played live, which is pretty unfortunate since it was really great songs and a pretty cool a very well suited style.

These two bands/project were very important parts the process of moulding me into what I became as a musician. Those are the very foundation of what I’m doing today and will do in the future. In 2017 I made the tough decision to put both Burnitude and Under down, none of them having been active for about a decade anyway. It was time to move on and I would be implementing the unrecorded Burnitude and Under material into future solo releases, released under the PM Saari flag.

Moving on - The End of Burnitude and Under

I’ve always been very particular with not mixing different styles in my various bands and projects. I always wanted to keep them apart and rather start a new one than try to implement the material if I didn’t found it fitting style-wise. I love bands like Queen and Kiss, but I couldn't see myself mixing, what I, in my mind, considered different styles under the same banner, not to speak on the same album. Since I write different styles of hard rock/heavy metal/rock this led me to having lots of different bands and projects going on, and which of many actually were pretty much the same. Like a close friend of mine used to say about me and this: “The one with the most bands when he dies wins.” and I can assure you, I would have won, if not...

The other day when I was listening to one of my biggest influences and heroes, David Bowie, it came up to me that not many of his albums sound at all the same, at all. He changed all the time, and I love it. Then Drake (my bass player Andreas Mallander), who knows how much material I have laying around and waiting to be recorded under various bands/projects, said something like: “Why don’t you just record and put everything out as “PM Saari”, it’s you writing all the songs, and they’re all power trios with you on vocals and guitars, it’s all you anyway?” Some of them obviously has to be their own bands since they are their own bands, but this really made me think. It occurred to me that maybe I have been seeing it all from only one perspective, I hadn't seen the whole picture and to be honest, this lack of time and energy I live in is really starting to get to me. I mean, the more brands I have to try to market and sell, the more work it requires and with this lack of time it all ends half-done instead of putting all power and focus on just one (or at least few). So I realized the time has come to shorten the list of my bands and projects and implement them into my solo stuff and came to the tough decision that it's time to put two of my dear babies down, time to officially disband Burnitude and Under. None of them having been active for about a decade anyway. The legacy of them will live on but this is the end of Burnitude and Under as bands. Time to move on.


There are however lots of great material, both Burnitude and Under, that never got recorded and released just waiting to get out and I will finish, at least some of it and put it out at some point, in some form, but it won't be under the flag of Burnitude and Under, but under the PM Saari flag. Actually one (pre-) Burnitude song has already sneaked into my solo releases and it's definite that one or two songs has made it into the next PM Saari release fitting as great as the tracks that I intensionally wrote to be there.