Through the distractions of life

Well I was hoping to announce a finished release, or even two, maybe even a release-date, in my next news post but we’re not quite there yet. We’ve been working with the two upcoming EP’s and the full-length album, “The Awakening”, in parallel but the first release out will be a two-song EP called “Between” and it is very close to done when it comes to the recording.

So far this round there has been quite a lot of experimenting, tryings, rerecording and rearranging in the studio, more than ever, both with the vocals, the guitars, the drums and even with the bass. Loads of time has been spent on this and on various small details to get the right final result (whatever that may be). I’ve definitely pushed the boundaries of my guitar playing and vocals way, way beyond and harder than ever before. I guess this is what easily happens when you don’t have a deadline, but hopefully it all leads to a better, a more perfect result in the end.

None of the songs on the EP’s will be on “The Awakening” so being an album-dude there’s the pressure and anguish of not releasing an full-length album but having only two songs carrying the weight of the release, with the focus much more centered, instead of normally, on an album that is, shared by some 10-15 songs. It will have to take its time, but we're getting there. 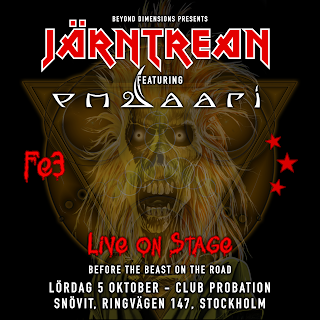 We’ve finally got our premiere live date for Järntrean ("Iron Three" in Swedish), also Fe3, where we run through songs from the first two Iron Maiden albums as a 3-piece power trio, booked and confirmed. It will take place in hometown Stockholm at Club Probation at Snövit (Ringvägen 147) this Saturday (October 5th). I’ve got my side-kick Andreas Mallander with me on fretless (!) bass and my long time friend Jan Viberg behind the drums. Feels really great to get that train rolling, it’s a project very dear to us and very close to our hearts.

Discussions about the whens, wheres and hows, and possible collaborations, when it comes to PM Saari Band live are being held as we speak, pretty exciting things in the planning but we’ll have to wait and see what comes of that. Besides this, I will do my utmost to keep myself down in the studio working with the music as much as is possibly possible and not to let myself be affected by the distractions, both good and bad, that life constantly seems to be throwing at me to keep me from it.