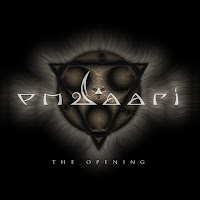 The Opening consists of 11 tracks, five with vocals and six instrumental, of which two are more classical pieces. The album is produced, recorded and arranged and totally written by me. It’s mixed, mastered and co-produced by Michael Bohlin, who had pretty free hands to take the recorded material wherever he wanted to and therefore pretty huge impact on how the final production turned out. This made the album an interesting mixture of Bohlins ideas and approach to the material with mine and made it pretty exciting and nothing that I’d ever expected it to be - This gave the material new life, made it breathe.

I was aiming for a (original, at the border of impossible) mix of strong material and melodies with wild improvisations and jam, kick-ass attitude with progressive arrangements and performance - Melodic Jam, Progressive Attitude - and if you ask me, I’d say we pretty much nailed it, but I’ll let you be the judge of that.

I play all guitars on the album and do all the vocals, all drums are played by Vesa Kallio and all the bass, almost exclusively fretless bass, by Andreas “Drake” Mallader. So it’s the same three-piece live band as my solo band, Wonderfuel, was at the time. All artwork and design is made by me and every single detail of the sleeve and packaging is exactly as I wanted it to be, no compromises.

(I’ll get back to you in another post later on going through the tracks more in-deep, track by track.)


You’ll find the digital version of The Opening at you digital music provider of choice, like: iTunes, Tidal, Amazon, Microsoft, Napster, Spotify and E-music etc. The physical version (CD that is, a vinyl LP-version won’t at least be out before mid 2017) might be found your local record store (are there any of those left even?) or be bought directly through me and the Saari Camp. Send an e-mail to cutomers@saari.net if you want to buy a CD and you can’t find it.

The plan is to have one, or a couple of, “release gigs” in the beginning of next year, but this might be postponed even a bit further towards spring due to a lot of things that are in planning in the Saari music sphere in the beginning of 2017. I’ll get back to you on all this soon.