Even though I have my chaotic ass over-full with family and work with my business at the moment the music stuff seems to start falling into place - Really weird actually, I mean I just became a father a couple of weeks ago, I'm considering building my own house (even though in a very early stage of consideration) and a new studio/rehearsal place and also an expansion of my business, on top of all the everyday madness - ending up in total craziness 24-7 and hardly no sleep at all (even less that before!). Still I feel I'm starting to get all my bands and music projects together, more structured and organized, things are starting to roll - yeah, all falling into place - strangely enough.

As we speak I'm putting the last touch on the mixing and mastering on half of the Inagone songs for the upcoming album "Your brand new root". It won't however be put out as an album but one song at a time, one song around every turn of month is the plan, starting now in the end of april. When all the songs are out there might be an album out in some form, but that remains to be seen when we get there. Check out the Inagone official website and the Inagone Facebook in the next future.

Lasse (vocals, rhythm guitars) and I are currently writing new Lizard Eye material and we've already got quite a few really strong songs but we want to have some totally brand smoking new material to bring up the level of excitement and freshness a bit - and with fresh I don't mean that we will change what we're about and turn modern and fashionable - Lizard Eye will never turn the sails by the wind, Lizard Eye is classic heavy metal in the veins of 1970-80s - in standard tuning, with real vocals and guitar solos etc! We're not sure about how the new material will be released but at least one or two new songs will be released later in 2013 in one way or another.

A week ago I, also Fred (bass - Straight Eight Diablo, Lizard Eye) and Pata (drums - Straight Eight Diablo), performed with frontman Dan Dark as a rebirth of the classic early 1980s Swedish heavy metal band Torch live on stage down in Europe. It was an awesome trip, so much fun and we all had the greatest of times. We did some real cool things with the classic Torch material, put our touch on it which kind of blew new life into the material and the response when bringing it live on stage was amazing. I'm having discussions now to continue the collaboration in form of some more live shows and also writing and recording some brand new Torch material with Dr Dark, but we'll have to wait and see how that'll turn out. 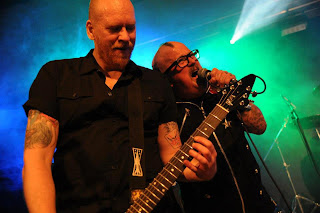 Me and Dan Dark live on stage in Holland delivering the goods in the name of Torch.