So finally (seems I’m using that word quite a lot, but can’t help feeling like that quite a lot) the release of new music is around the corner and it’s the single “The Lockdown Sessions” that will be out on Friday January 20th. It’s two songs that were recorded more or less live at Studio A6sound in Stockholm during the pandemic lockdowns, with additional tracking at my Beyond Dimensions Studio. It’s the first release featuring a new heavier direction in which we’ll be going live with the PM Saari Band. 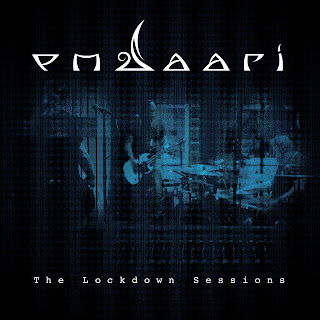 It features two not that new songs, one of them is called “Where’s My Bones?” and has lived through many reincarnations through the years, in a number of bands like Inagone and B.L.O.W (I believe I wrote it originally for B.L.O.W). It’s all written by me and the cool thing is that through the 3-4 bands that’s been playing it live the arrangement and the structure of the song has remained pretty much, if not exactly the same, even though each band has arranged it from scratch at rehearsals - so I guess this must be the perfect arrangement for it. The other song is also written by me and has its history in the band Straight Eight Diablo (S8D).
On this one I have Mr Patric Idman on the drums (who was with me in Straight Eight Diablo) and Andreas Mallander on fretless bass (who was with me in Inagone), so tying it all together here. The guitars and vocals are performed by me and it’s produced and mixed by me. The recording was engineered by Arvid and Felix at A6sound and additional recording by me and it was mastered through Abbey Road Red/CloudBounce.
It sure was loads of fun in the studio doing it all the old (real?) way, but of course I’ve been running the new way for so long by now that it was inevitable to finish it up in that manner. Original cover photo by Robin Idman and the cover design and photo treatment by me.
Enjoy.
/ PM
Posted by PM Saari