Status S - No rest for the wicked

I’m happy to announce that my work on my upcoming solo album is finally, finally done and done (the work with the music and audio that is). The tracks are now sent off for mixing but since we don’t particularly have any deadline I don’t have any dates when it will be completely finished or released yet. More on that in the next future though. Now the plan is simply to start writing for and working on my second solo album which will be done guitar a bit differently, and hopefully way more painless and smoother. As said, more on this very soon.


Straight Eight Diablo are out doing some live shows, delivering our goods that way - the way it should be delivered - and having a great time doing it. Some new killer tunes have been added to the setlist and are tried out live on stage and I can safely say that we have material to easily cover a full-length album of great quality by now and discussions about entering the studio are in the air in the S8D-camp.

Elements Of Crime were only supposed to do the shows we did earlier this year but due to some very interesting interest from interesting directions for the band we've booked some more live shows. Might even end up doing some new music, but we’ll just have to wait and see.

When it comes to Lizard Eye there will be some important meetings the next months and we'll see the outcome of that and where that will be taking us. Things will most certainly happen.

Unfortunately the Dixie Highway thing didn’t work out, so that one is off and out.

Got some plans for one or two other pretty cool projects that seems to be happening and really soon, more on that then and when. All the other bands and project are still in their respective deep dormancy and we’ll just have to wait and see... 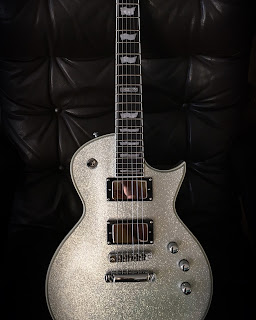 The other week I finally got my hands on this guitar I’ve been hunting for since I saw Queensrÿche live at Klubben in Stockholm in 2004 (such a great show, by the way) and Michael Wilton played this awesome ‪Silver Sparkle‬ ‪‎ESP. I searched for years and off course it was custom shop and I couldn't get my hands on one. But now I got one Ltd version of it delivered to me and she sure is lovely!


Talk to you soon.