A bit of a break

We'll be taking some months (the plan is half a year) off from rehearsals and playing live with 13 Chaos St, Inagone and my solo band now. We will however continue the studio-work in january, with the Inagone and my solo stuff that is. In january and february I'll also be doing some live dates with Lizard Eye, check out the Lizard Eye website for confirmed dates.

We did some live rehearsing and gigging with 13 Chaos St and it was, as always (and even worse this round), some days and nights of total twisted decadence madness. I quote Jari (vocals 13 Chaos St) on this to sum it up: "If someone, despite all the facts, is still wondering why we don't play live more frequently, one can easily refer to this weekend (when we played Dalarna in the beginning of November) and say: That is why." So we'll be laying a bit low now with 13 for half a year or so, but we'll be continuing writing some killer material for a new album, for which we already have a producer and a studio nailed - Jari and I have a bunch of songs written already and it's all really, really strong and cool material indeed.

Straight Eight Diablo is working in the studio (working with the drums as we speak) on a full-length debut album, even though in pretty slow pace, but it's looking (or sounding) pretty promising.

A while ago I was invited by my friend Michael Bohlin to put on some lead guitar tracks on his new 8th Sin album, which I off course did. So I'm playing a guitar solo, or two, on the smoking new 8th Sin album "Cosmogenesis" which is out now.

I've also put out my "PM Saari Collected 3" CD featuring 18 tracks I've written, performed, produced and recorded with my various bands and project the last years. It has very varying stuff on it trying to show my whole music spectrum at this point in time and it's only available in CD format.

Talk to you soon again. 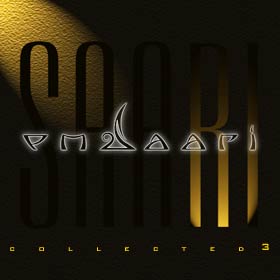