Diving backwards and respecting my heroes

I do my best to get time to keep myself updated and check out the new releases of my old heroes, as well as the newer bands and artist, but there hasn’t really been that much coming out the last 10-15 (or even 20?) years that touches, or even interests me. However every now and then there pops up some really positive surprises which is always exciting, like for instance Queensryche’s, Alice In Chains’ and Lynch Mob’s last couple of albums, Ratt’s “Infestation” and Scorpions’ “Sting in the tail”. But those pretty much covers it, simply not that much music for me coming out these days. This however has naturally drawn me backwards in time and made me want to discover everything that I missed back in the day, that came out before I really started getting into music, adding new top favorites like the old 1970’s albums with Aerosmith, David Bowie and the Dio years of Rainbow that has all become really important for me. Also got into the first, the 1970’s, albums with Thin Lizzy, Judas Priest, Scorpions and even AC/DC, bands that I grew up with but who also did so much awesome stuff prior to when I started to listening to them, stuff that I never really have gotten the chance to dive deep into until now. 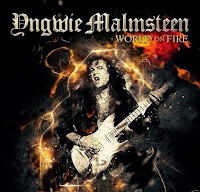 Anyway one thing occurred to me a while ago when one of my biggest influences and heroes, Mr Yngwie Malmsteen, released his new album “World On Fire” on which he performs the vocals himself (and the bass and some of the keyboards and also the production). I had the same reaction when I heard about this as so many others, and when I listened to it the reaction remained the same, I was like, what the f*** is he doing?! (Yes, I know I 'm kind of doing the same thing, but we’re talking about Yngwie f***ing Malmsteen here.) He could easily bring in some killer, top musicians into his band, why doesn’t he do that? Why doesn’t he let a producer (or/and an engineer, I don’t know) in so it all would sound better? And why doesn’t he bring in a killer vocalist to do the vocals, as he has always done?! and I saw so many similar reactions out there on social medias at the time. Then some weeks later I felt maybe I should listen to the album a second time, give it a real fair shot, and I did and I thought, well it doesn’t really sound that bad, and he has done everything himself, the work of one highly talented musician, if you ask me. And why shouldn’t he get to do that if he wants to? He’s done it the other way enough of times already and hasn’t he earned the right to do exactly what he wants? I mean he has made a handful of records (the first 5-6 if you ask me) that are up there at the very all-time top, done so much for hard rock/heavy metal music and not to mention the guitar playing, changed the whole thing and influenced everyone in a way or another, whether they admit it or not. He is the only real rockstar coming out of Sweden, so hasn’t he earned to do whatever he wants with his art? I mean if nothing else, this keeps him and what he does pure and real, which obviously is very rare these days.

The same thing with another huge influence of mine, the (al-)mighty Iron Maiden, and their last two records. I mean, haven’t they earned to do whatever they want after all they have achieved? If they want to do more progressive and unpolished stuff, why shouldn’t they?

And no, “The World On Fire” and “The Book Of Souls” isn’t “Marching Out” and “The Number Of The Beast”, the material nor the performance don’t even come close, but bear in mind we’re comparing them with real top masterpieces here. This is now and they’re still doing it and what is wrong if they are happy doing it and even having fun doing it? I mean, if you don’t like it, don’t listen to it. You can go and see them live, because they still entertain the socks out of most newer bands, that goes for both examples above, and if you don’t want to see them live either, don’t. Just remember that what they’ve done doesn’t disappear or change by them doing what they do now. This off course goes for many other bands and artists who’s still enjoying making new music (and maybe aren’t doing it entirely for the money).