Something a bit different out 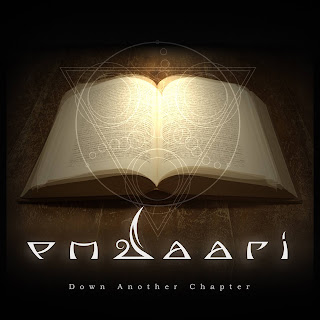 The next release in line, which is out by now, is the to be me a bit different two-song single called “Down Another Chapter”. It features the songs “Down” and “Closing Another Chapter” which are more classic rock; me stepping away from the traditional hard rock/heavy metal that I usually deliver. Arrangement- and production-wise the songs were supposed to be super clean and straightforward, thought I’d for once go for less is more, but since I’m more of a “more is more” kind of guy and after all the time I spent with the songs in the studio it was destined to fail and they ended up with quite a bit going on in them. Nevertheless I’m very content with the outcome.

The drums are performed by Ralph Rydén and the fretless bass by Andreas Mallander, and I handled the rest - the guitars, vocals, percussion, the producing, engineering, mixing and the artwork, the mastering was done through Abbey Road Red/CloudBounce. The music and lyrics are written by me and despite the songs leaning towards a melower spectrum the lyrics, where I’m ventilating reflections and thoughts of darker states and times in life, turned out pretty dark. First I felt that the lyrics turned out too open, naked, but realised that I probably felt that because of the arrangement and production and not really what the songs were about, that it wasn’t like usually covered in and dug down by massive overdrive guitar madness, the production was more naked than I am used to.

This is the first time that I feel that I’m really beginning to get the mixing a bit where I want it, hitting a bit more where I’m aiming; I believe I’m slowly starting to learn the art of mixing a little bit. I really enjoyed doing this a bit different thing and both performance- and mixing-wise stepping away from the hard rock/heavy metal world which floats through my veins and it was all fun and easy to record and mix. I had no expectations so there was no pressure at all, and now I’m talking about the worst kind of pressure: the one from yourself. There were no boundaries and no rules, not that I really have that with my ordinary hard rock/heavy metal stuff either but that sits so deep in my influence, it's in my DNA, so I’m unconsciously following some unwritten holy rules. This made me realise that this is one thing that normally makes the process of recording and mixing pretty hard and tough, but here I wrote a song and recorded it and it could go literally anywhere, and it’s allowed to do that, it made me feel totally free, liberating.

And yes, I do believe these songs differ quite a bit from what I’ve been doing so far, in more than one way, but still the fact and the bottom line is that it’s all music to me, I just write what comes out and record it, to me it’s all Rock'n'Roll. My next release which I’m working on as we speak, will be in the traditional vein of my hard rock/heavy metal heritage, though this time maybe not as progressive as the earlier stuff, but my future releases will be taking different turns and directions, it will evolve.

“Down Another Chapter” is out now and you'll find it digitally at all the 21st century music providers, here follows some with direct links: