The last year (or two?) I’ve been, apart from classical music and some other pretty strange stuff played on the Swedish national radio channel P2, listening almost exclusively to two bands: Led Zeppelin and Aerosmith (the early stuff from the 70’s). Totally digging myself into it which has off course affected my writing, as always - My writing, and my playing to a certain point, is always very heavily affected by what I listen to at the moment. One thing lead to another and I ended up hooking up with this singer called Palle Esperanza and after a month or so we found ourselves having written a hand-full of really great rock songs in that vein. Turned out to be some pretty cool stuff and really strong material so we decided to give it a real go, to try to put a band together and bring it out! We're calling the project Dixie Highway and will be going for a classic four-piece line up and we'll start going through and auditioning potential drummers and bass players any day now. We’ll see what comes out of that, exiting indeed. 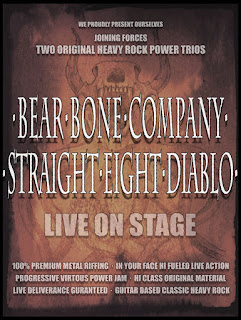 We’re out playing live with Straight 8 Diablo and we’ve done some great shows, feeling we’re really getting the S8D stuff together, and we’ve got some more gigs booked on this round. We've teamed up with our friends, the band Bear Bone Company and will be running some gigs together with them. Simply two kicking power trios delivering entertaining progressive guitar based heavy rock jam live on stage. We've already done the first one, which was at Pub Anchor, Stockholm (Sweden) some weeks ago and tonight it's time for the next one in line at Copperfields in Fridhemsplan (Sweden). Going to have some great time with this for sure, looking forward to that.

Check out those dates at my Reverbnation's "Shows-site" (you'll find all my live dates with all my bands and project there):
PM Saari Live Shows @ Reverbnation


I've been playing some gigs lately with bands with some really technically awesome guitarist, like for instance Mr. Björn Kromm in Bear Bone Company, but also others, and that has inspired me (which doesn't happen too often nowadays) and it have actually made me want to get my chops together a bit, bring my guitar performance up a level. Haven’t felt the urge to do that in some 20 years! I now come to the realization it’s actually fun to play guitar, and I mean just play the guitar, not only when writing, rehearsing, recording or performing live, but just play the guitar, striving to develop technically. Then again it remains to be seen if I'll have the time and the energy to keep it up long enough to really improve technically so it shows in my playing, but at least I'm having me a good time and enjoying myself on the road there.

The other day Vesa (Kallio, Drums) and I had a couple of glasses of red wine and finished up the editing of the drums of the solo album. So now it's all on me - to finish the retakes of and additional vocals and to compile and edit it and all the bass and guitars. Then it's off to be mixed. So we're even closer now...