Thought this would be the perfect time to take a second dive into the history of PM Saari, so...

After Elements Of Crime had called its quits sometimes in mid 1990’s I got a call from a certain Patrik Idman, yes the very same who’s today handling the drums in Straight 8 Diablo and some other various PM Saari involved projects, who asked if I would be interested in auditioning for his new band Risky Riot in which he was the drummer. After one rehearsal it was a done deal done. 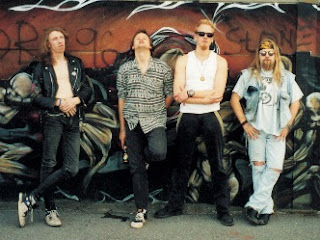 Everything clicked on every level and Risky Riot became a very tight four piece unit and lived the Rock’N’Roll life, with all that comes along - full on, all in - the following couple of years. This is when I started to write songs for real and really developed my writing, writing both alone and with the vocalist or/and Idman, sometimes writing riffs and sometimes vocals.

Equipment-wise I still went with the Sans-Amp and the two Saari Customized Ibanez Roadstars. But just a bit later I started use various Marshall tube heads and also got my trusty Crate Blue Voodoo 60 head, all brought out through my custom, really old and worn (it really looked like trash) bass speaker cabinet which I totally rebuilt the inside of and loaded with two Celestion 12” elements. A very simple and straight rigg, I didn’t even switch sounds for solos (I was the only guitar player). So Risky Riot went on very intense for a couple of years and when it had ran it’s cause (or we subconsciously for self-preservation ended it to save our lives?!) I started my first own projects Burnitude (called Burner in the beginning) and Under, starting to build my studio skills and taking my writing, both music and lyrics, even further. 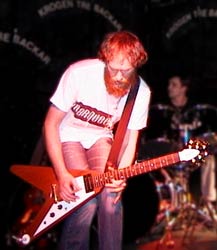 At this point I had put my two dear old really worn out Roadstar’s on the shelf and moved over to Gibson and my The Paul’s and my dear Flying V’s became my main axes and I still use the V’s in some bands like in Lizard Eye. Around this time, when the very first version of Line 6 POD was released I was totally hooked. I ran it into the loop-return of my 1980s Marshall JCM 800 Lead Series and it sounded so great. I remember being told that after every live performance by various people and they always asked how I got that awesome sound and when answered went like “What? Pod?! No way!”. But, yes way. No one could believe it.

Unfortunately that version of the POD was too slow for me when switching sounds so I had to upgrade to a newer version, and then it by then was totally worn-out from all the gigging so instead of getting a new one I went on with the development and moved to POD XT (with which I did A LOT of gigs and most of them straight into the PA) and later POD HD and the Line 6 Spider Valve MkII HD100 head, but I never really quite got that incredible sound again, not to this day. 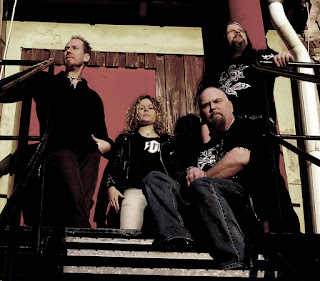 In the summer 2001 I teamed up with Lasse Gudmundsson and joined his band Lizard Eye, replacing among others JJ Marsh who had left to join Glenn Hughes’ solo band. Lasse and I soon discovered how we completed each other as songwriters and arrangers, him pulling towards the more simpler, straight on and cleaner while me pulling to the more complexed and progressive with lots of things happening, combined a proven winning recipe for strong songs and exciting and interesting arrangements, probably the greatest strength of Lizard Eye. We have written most Lizard Eye songs together, a few on our own though, but what we have written of the songs varies a lot, like in many Lizard Eye songs Lasse has written the riffs and I the lyrics, even if one would think it to be the other way around, like for instance the song “Afterlife” which is very Iron Maiden, which all of you know is my house-gods, but Lasse has written the riffs and me the lyrics. Another significant strength of Lizard Eye would be our kick-ass live presence which probably is a pure reflection of the fact that we all love playing live on stage.

Lizard Eye quickly turned from more of a project into a band and has, through various releases and some rhythm session switches, kept rolling in it’s own pace ever since. Now the band has reassembled after a two year break and are as we speak rehearsing and arranging new material for an upcoming full-length album which is planned to be recorded towards the end of the year. Some live-shows are planned for 2016 as well, but until then enjoy the latest Lizard Eye release "Flames Of The Sun" where you’ll find some of my best songwriting and guitar playing to date.


You'll find the first part of PM Saari History here, in case you've missed it, and part 3 is found here.